This feels very much like carcinization, the convergent evolution in which a crustacean evolves into a crab-like form from a non-crab-like form.

Recovering communist military hardware from the bottom of the ocean, where’s the Hughes Glomar Explorer when you need it.

So I installed a SSL for the first time in the almost 21 year history of this whatever this is, mainly to verify myself on Mastodon and see if how this ActivityPub thing works.

During the filming of The Abyss, Mary Elizabeth Mastrantonio said some disparaging things about my hometown, Gaffney, SC in Rolling Stone magazine.

This YouTube video tells the story of the making of the movie at the partially-constructed-but-never-used Cherokee Nuclear Power plant. It was as the video describes, a “Sh*t Show.” I’ve held a grudge for a long time about what she said, I mean, it’s OK for me to think that but it’s not OK for others to feel the same.

We got a new phone system last year in my office. With that change, we all got direct extensions, and to account for future expansion, we got more numbers than we actually use. Because of this, from time to time we’ll get wrong number voicemail messages on extensions that don’t really exist. From time to time, I clean them off.

The most recent time I did this, I found a gem. It’s from February of this year, and it’s absolutely remarkable. I’ve listened to this about a thousand times, and each time I hear something new. There’s so much human drama here, such a compelling story.

Our cast of characters:

I haven’t had any success tracking down any of these people, but I do know that the initial call from Christine or Scott couldn’t have originated from our office, because the outgoing caller ID from any extension is the main line. What I can’t figure out is how Lisa managed to misdial the number given that she was responding to a caller ID.

But this bears announcement:

So my girlfriend Amanda asked a few months ago that I paint for her something similar to the paintings that I’ve done that hang in my condo. For her painting, I chose a picture of a bridge that I had taken last May when I traveled with her family to Bellville, Ohio. (The place where her parents grew up.)

Now, we’ve been dating for quite a while now, so I thought that I would use this opportunity to include a hidden message that I’ve been meaning to ask now for a few months. I hid the message in the painting using a yellow highlighter. It’s invisible to look at, but when exposed to a black light, the message glows like this: 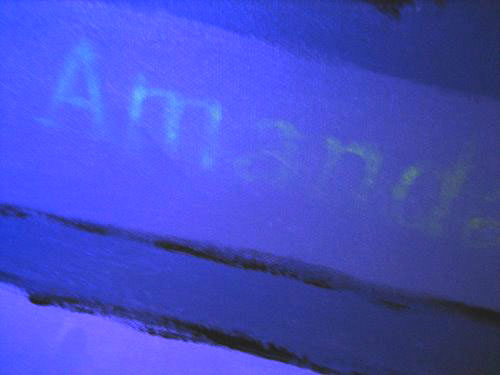 So several Fridays ago we had planned a weekend getaway to visit friends outside of Atlanta. Amanda took a half day off from work that day to get ready, I left work early to set the stage. I had to get her out of her house somehow, so I called her and asked her to go run an errand for me, which she happily obliged. I went into her house, put the painting on her mantle. I replaced the lamps in the sconces that are on either side of the mantle with black light bulbs.

She came home surprised to see me there, but amazed to see her new painting on the wall. I told her that there was more to it than just the painting. We turned on the light, and we started to decipher the message: 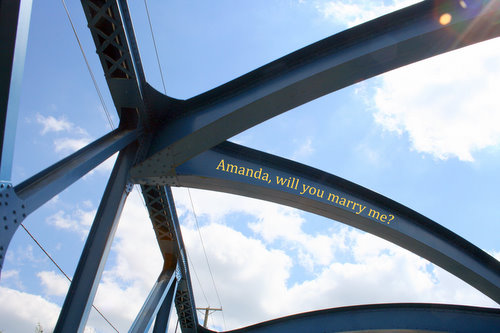 Because of the light in the room, I had to reveal the message one word at a time. (It’s more dramatic that way.) We started reading it… she stopped me when we got through “Amanda, will you…” and said, “WILL I WHAT?!?!.” (Needless to say, she was surprised.) I told her we should just keep reading…

We got to the end of the message, I got down on my knees and repeated the question. She said yes! 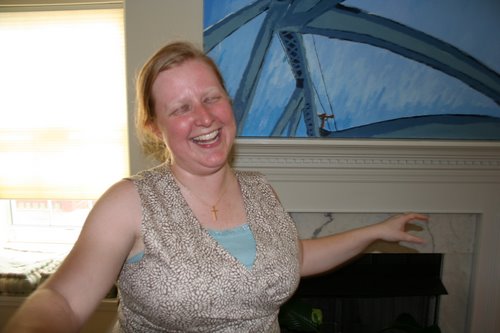